Formed by the intersection of Moore’s Creek and the Rivanna River, this parcel of land previously stood as an epicenter of industry and trade. Located one mile from Charlottesville’s original downtown, the site was adjacent to Pireus, the port of Charlottesville, back when the town billed itself as the Athens of the South. Prior to the founding of the Woolen Mills in 1868, the site was first developed in 1795 with a water grist mill. Later, in 1840, William H. Meriweather built out what was known as “The Charlottesville Factory,” a collection of buildings housing wool, cotton, saw, and grist mills. In 1851, John Adams Marchant took ownership of the factory, producing clothing for enslaved persons and moving into cloth and uniforms during the Civil War.

In 1865, the Union Army captured Charlottesville and burned anything that could benefit the Confederacy - including the factory. Marchant’s son, Henry Marchant, had recently taken helm of the company and became responsible for the resurrection of the structure and its industry, starting modestly with carding (cleaning and untangling) wool and slowly building up business over the decades. In 1868, Marchant renamed the business, officially establishing “The Charlottesville Woolen Mills.” At the time, the company had a staff of 50 people and produced a variety of wool textiles, from fabrics for uniforms and work clothes to cashmeres. Despite weathering hard times, including dam breaks, fires and the economic “Panic of 1873,” The Woolen Mills became nationally known for their excellent production of fine military fabrics and uniforms, furnishing cloth for the majority of railroad workers and military schools.

As the company grew, so did the surrounding mill village and neighborhood as it was originally too far to walk from downtown. Dating back as far as 1847, housing was added over the decades in a variety of architectural styles, including Gothic Revival, Colonial Revival, Craftsman Bungalow and Cape Cods, many of which stand today. The mill added the town’s first telephone in 1878, a Gothic-style chapel and a schoolhouse to foster community.

The Charlottesville Woolen Mills continued operating into the 1960s, again providing uniform cloth during World War II. Eventually, the factory was closed in 1962. The buildings were more recently used as a storage facility. The majority of the surviving mill buildings standing on the site today were built in 1920-1930s. 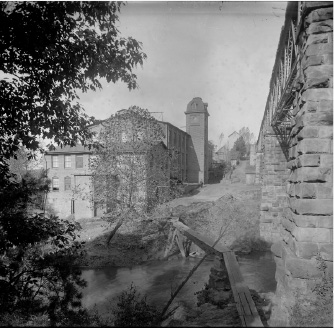 Historic Documents +
1800 Athens of the South

Originally, a grist mill was started in this area in 1795. After a series of locks and dams were constructed in the early 1800s, this confluence of Moores Creek and the Rivanna river became known as the port of Pireus, the “Athens of the south” (ancient port in Athens, Greece). A sawmill was added to the site around 1820, processing wool and cotton as textiles grew to be a significant industry in Charlottesville.

Modest growth occurred at the mill until 1850 when the Virginia center railroad line opened within a few yards of the mill. The company was reorganized as the Charlottesville manufacturing company.

John a. Marchant purchased the 13-acre property. The purchase consisted of the cotton and wool factory, a saw, grist and plaster mill, and storehouse. At the time, the mill was producing 70,000 yards per year, with a $24,000 annual return.

In 1865, after producing uniforms for the confederate army, the mill was accidentally burned down by union troops while trying to destroy the railroad trestle. The union general was none other than George C. Custer.

Henry Marchant, having purchased the mill from his father, used the fire as an opportunity to rebuild & modernize on a more significant scale. The Charlottesville Woolen Mills was incorporated in 1867 and was able to compete against larger wool mills in the northeast.

Per a company report from this time: “The property of a manufacturing company must ultimately rest on the efficiency and fidelity of its labor. It must be impaired by whatever impairs the comfort and morale of its operatives. It must be promoted by whatever promotes their self-respect, elevated their character, and cultivates local attachments and the home feeling.”

There were stores and a chapel built on land donated by then owner, Henry Clay Marchant. This built tremendous loyalty from the employees that resulted in low worker turnover and many generations of families working at the mill during its lifetime. The 70-person workforce in 1882 had grown to 115 by 1892. Half of the employees were women.

Charlottesville wool was growing in popularity and the united states government became a major purchaser for postal & military uniforms. Police departments of large cities, military schools (including VMI), and railroad workers soon followed suit. Wool produced from the Charlottesville mill was selected as the standard for uniforms at the 1893 world’s fair and won awards for the quality of their product. ‘Charlottesville Gray’ became a requested color by many institutions.

Around this time, the Woolen Mills neighborhood grew significantly. As was common in company towns, the mill built duplexes in order to maximize the number of employees that could live in a given building. However, unlike other company towns in the south, when adjacent land was subdivided and offered for sale, mill workers bought lots and built their own houses, creating stability and variety in the neighborhood and at their place of employment– the mill.

The two “saw tooth” buildings (so called because of their roof structure) on the west side of the property were constructed between 1905-1920. The main 4 story building was completed in the late 1920s. With business growing, new buildings were constructed to keep up with the demand. They not only produced uniform cloth, but also sold to high end tailors like Brooks Brothers.

By the 1920s, the Woolen Mills village possessed many of the attributes celebrated and sought after by “new urbanist” planners. The village had distinct boundaries: a golf course to the west and north, the Rivanna river to the east, and Moores Creek to the south. The neighborhood was pedestrian friendly; the activities of daily life, church, stores, school and community accessible on foot.

The depression hit the mill hard, with work shutting down from May to October 1932. But by 1937, orders increased significantly and the mill was working overtime. During WWII, the mill was producing 15,000 yards of cloth per month, with 95% going to the US Navy, including uniforms for the famed Tuskegee Airmen. The mill enjoyed its best year in 1951, expanding to making civilian flannel cloth. In 1959, with its best days behind it, Woolen Mills was sold to the Kent Manufacturing Company and subsequently closed in 1962.

With the building restored to its original character, Woolen Mills has become the new home to WillowTree and The Wool Factory; a brewery, restaurant, event space and coffee/wine shop.